This November has been quite a crazy month so far.  However, one of the undeniable highlights of this month was definitely the World Series, which will forever mark 2016 as the year the Cubs broke their 108-year-old curse and pulled through with a legendary win.

So how did the Cubs do this?  How did they manage to become one of the best teams in the league over these past few years?  And what exactly makes them a great team?

Believe it or not, I was able to secure that answer from my twin brother Gerry shortly after the World Series ended.  It was all thanks to a hungover phone call I made to him the night after the Cubs won, and he himself expressed his desire to be with me in Chicago for the celebrations.

“You know how the Cubs became such a great team?” He laughed over the phone as my ears perked up with interest. “Well obviously they got a new manager, but this guy they hired is so fun!  He always encourages the Cubs to have fun during press conferences, and you know how they do it?”

My brow furrowed as I sipped water, trying to think of an answer.  I immediately gave up due to my pounding headache. “I don’t know, how?”

“Google it,” Gerry advised. “These guys wear funny suits to their events.  They even wore pajamas once! Isn’t that crazy?”

I had trouble believing Gerry at first, but he insisted that I Google it. “I’m pretty sure that’s how they became a great team.  Their new boss told them that it was okay to not take themselves too seriously!”

Sure enough, Google did not fail me, and when I typed in “Cubs funny suits” or “Cubs pajamas” all of the results I wanted popped up.  The Cubs are certainly challenging the other teams in the MLB with their style!  Fans love everything, from these funky suits… 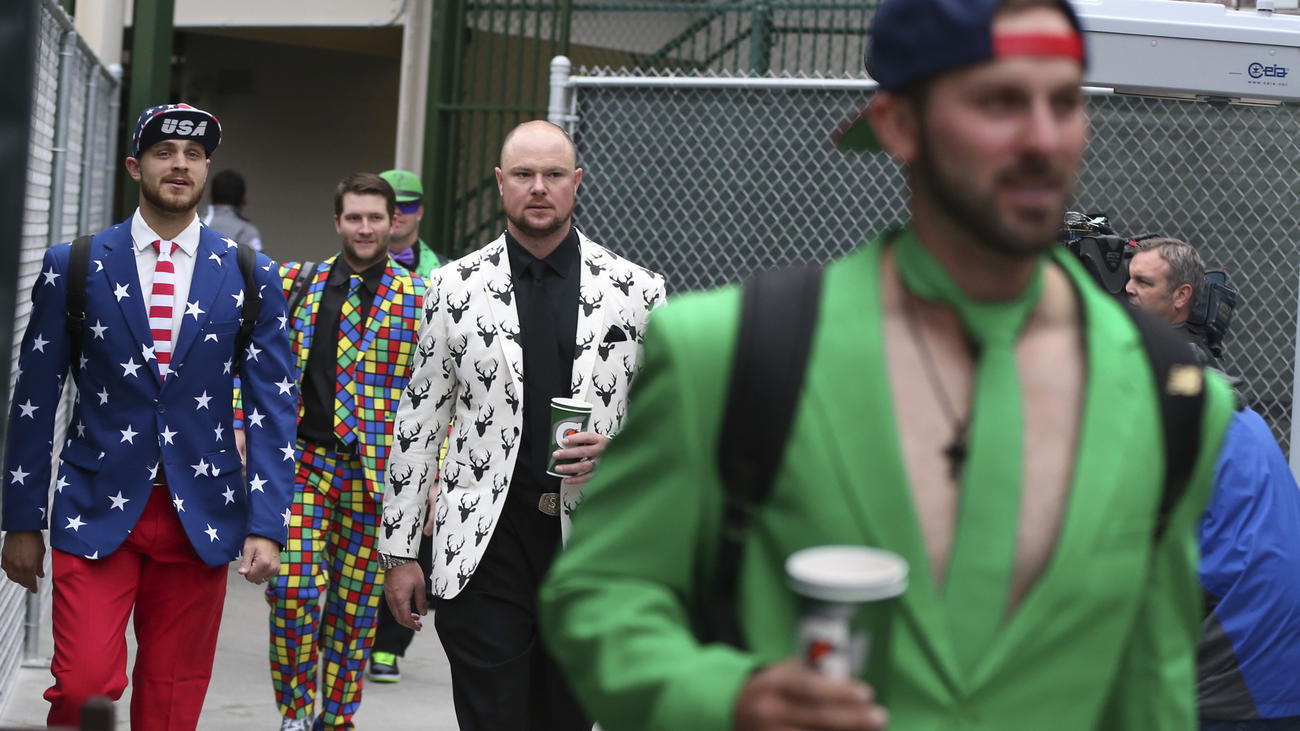 … to these funky pajamas…

… to even more funky suits! 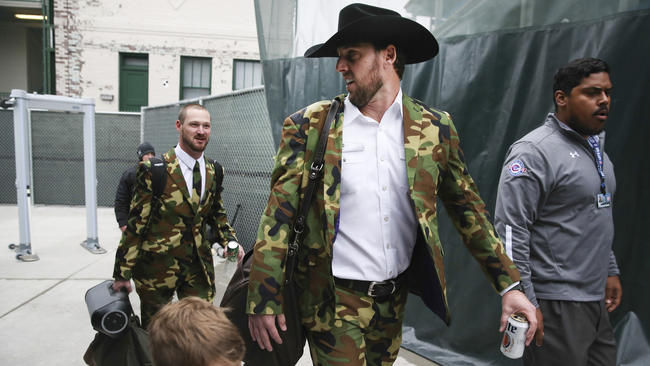 In fact, I’m just going to post more pictures of the Cubs in their stylish, outlandish suits. 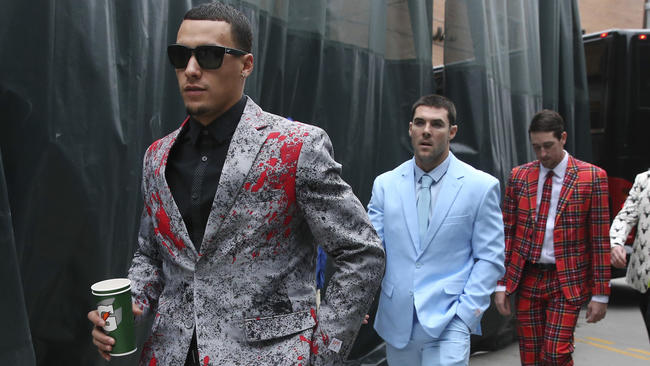 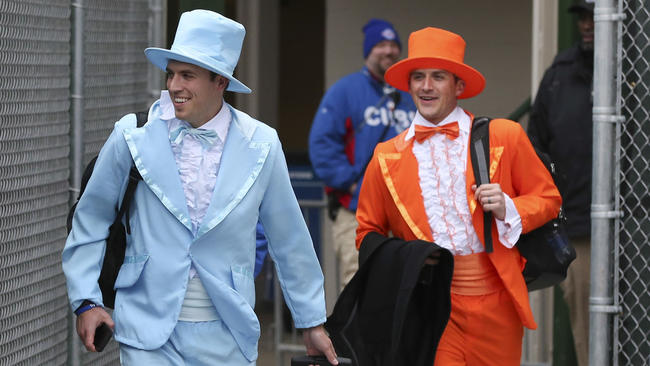 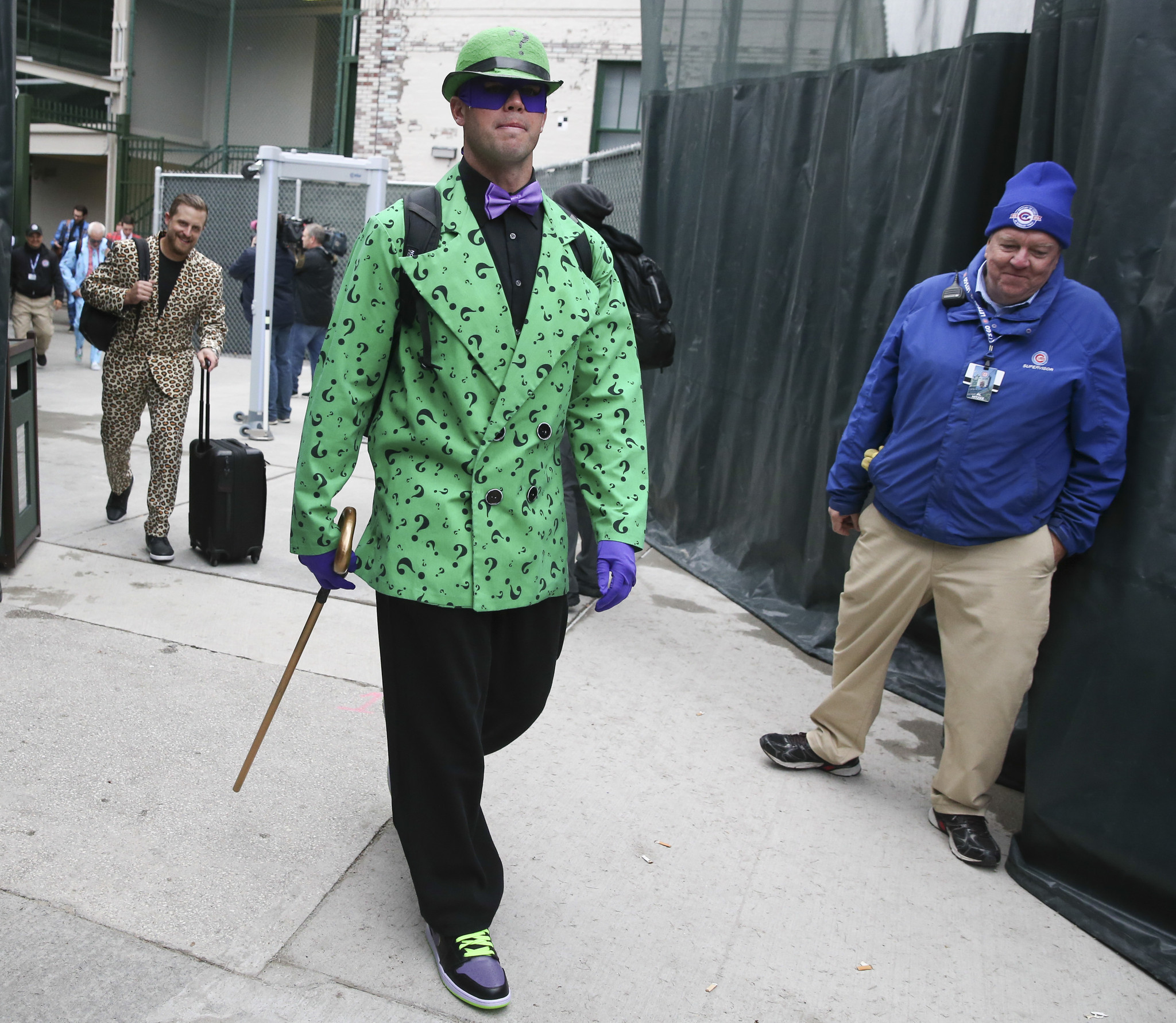 (this one is especially a bonus)

Damn.  I knew I liked the Cubs for a reason!  And not just because I have a tendency to root for the underdogs, or because they got the paparazzi fashion blogger strut down, but because they are truly a team who enjoys having fun.  I still look at these photos sometimes, especially after the other chaotic and depressing events that occurred this past month.  And you know what?  I think life would be a lot better if we all just took some cues from the Cubs.

Many thanks to Gerry for suggesting that I write a blog post about this, and many thanks to the Cubs for making at least one good thing happen this month.  Go Cubs go!